I hadn’t known much about grief in my early life. Growing up we’d lost a pet or two. When I was in my early twenties, my cat, Tyson (god rest him) died and then my grandad (a truly great bloke – hard as nails but soft on the inside) was taken a few years after that.

Before I turned 30, I didn’t know much else of grief. Bit of a first time caller, long time listener you could say. My thirties have not been all that kind to me, belting like a Queensland hailstorm with more grief than one woman can possibly handle.

I’ve got a close friend who has her own shitstorm brewing in her life right now. She hasn’t lost anyone in the true sense of the word of actually losing them to death but she’s pretty cut up nonetheless. She’s lost the life she knew. She’s lost the future she thought she had. She even feels as though she’s lost her identity and now, in her very early forties, has to start over. She says she feels empty, alone, defeated. And possibly pretty shit-assing ripped off. As if everything she knew has just gone up in smoke. Her life unplugged. It’s all too familiar.

She asked me something I’ve heard so many times I could almost stamp it to my forehead but when you’re plunged into grief head-on, it feels better to talk to someone who’s tread the waters before you. ‘How did you do it…how did you keep going?’ she asked quietly. If you’ve got a spare thirty-eight hours or so, I can go over it in absolute blow-by-blow days of darkness but like everyone else who is going through their own pit of grief, you just do. Shit, you might not even feel truly a human at times, no actually make that all the time. Days go slow, nights even slower. Especially Sunday nights, which are utterly the most shitful day of the week. Everyone’s tucked up on the couch with their family – a spag bol in their belly and a glass of red in their mits. You’ll never quite know loneliness as much as when you no longer have that person who used to occupy the space beside you. 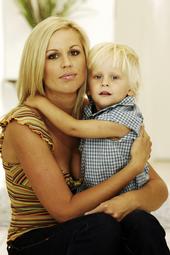 things get better, so much better…

I’ve been doing it so long I don’t even realise. Shelving grief might not be everyone’s idea of healing – and certainly not a qualified psychologist’s view…but what’s the alternative? What do you tell your teary toddler who asks why his dad can’t get out of the six foot mahogany box he’s shut inside? Who asks if heaven has a door because he wants to go and find him. How do you keep going when you’ve had five cycles of IVF, nine failed embryo transfers and one early miscarriage that you thought really was the one that would work this time? As a widow and as a mum, you attempt to do as best you can and hope like shit you make it through another day. Each one is a tiny brick in the great wall towards healing. The pain won’t get any easier and the loss won’t ever go away. Grief will permanently occupy a firm position in my heart till my last breath.

Even though her pain is different to mine there is a certain sameness that comes with a woman’s grief when she loses the partner she knows and loves like a limb, an extension of herself. I’m no expert but all I can be is an ear and a voice. A voice of experience that life will one day be better. So so much better (a greater soul in The Vet who found me and helped me back on my feet again sure is testament to that). To anyone who has ever known grief like a second skin, big biggest hugs, Lady MamaG xox