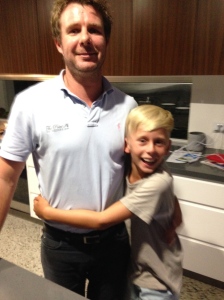 Two months is waaaaay too long to keep a secret and seriously, there have been so many moments in the past eight weeks or so where I nearly almost probably did put my foot in it. Luckily for me, the 11 y o was oblivious. Up until about an hour ago, he thought we were going to tuck into his fave St Kilda churros in Melbourne. At dinner time I told him to sit up at the bench.

Guess what…? I asked. We’re not going to Melbourne. His face dropped. I think he thought we weren’t going anywhere so for a moment there he might have even chucked me a boy’s version of the stink eye. I handed him his little travel wallet and said, nope, not Melbourne…we’re going to…Disneyland!

He pretty much flipped out like Kanye at the Grammy’s except waaaay more graceful like. He looked at The Vet and he looked at me. He looked back at the vet as if to double check I wasn’t making it up. ‘No…! What? Disneyland, really…is this a dream…am I dreaming?’ There were firecrackers going off in his little heart like the fourth of July. I’m pretty sure I might have even seen one or two actual stars twinkle out of his eyes. And yes, Mama had to choke back a few tears. I spose there’s not too many times in life where you get to lay a surprise on your kid as big as this and hells to the yes it was worth it. He asked again, ‘Are you sure I’m not dreaming…?’ No buddy, this ain’t no dream this be real true life.

He’s off to pack his backpack for the biggest and bestest holiday of his life. His words. While mama is still caught between two or three pairs of fawn coloured ankle boots…and deciphering how many pairs of jeans I will actually need…(so far it’s seven). Come on, it’s LA, you never know who might brush past you on the sidewalk. If my luggage comes in at oversize, I may just have to stow away a few pairs of boots in 11 y o’s suitcase which seems well-proportionally light to make room for all his mama’s shopping. Look out LA, here comes de Lady MamaG! xox

One thought on “Part II…”