I’m still not even used to saying it. I have kids. Children. Two of ’em. Seems so strange to say it out loud, like a real pinch myself kinda thing.

At first I thought shit, it’s going to be fucking tough having a fourteen year age gap between my kids…which obviously wasn’t meant to happen that way and those reading along for the past while will know how and why it happened but it’s actually the best thing. Apart from the how of course, that can go fuck itself but the age gap of my two beautiful beings this past year has given me the greatest insight and made me one helluva proud.

He watches her with the same amazement and pride as we do. He tells me he misses her every day when he’s not around her. And when he comes in from school, her little face lights up and she scoots across the floor at a pace with her one handed-crawl like a little crab. He scoops her up and she cuddles into him, her head tucked tightly under his chin and she rests there with her little arms wrapped around him, not letting go. Secure and happy. That is it. That’s when I think the age gap doesn’t matter a bit. In fact it’s the best thing as a mother I could hope for because I get to have one at the cusp of manhood and one just starting life…each of them able to learn so much from the other. And both of them so adoring of one another.

‘I really want her to stay this age forever, like never ever grow up,’ he told me this week. Oh my heart. They are the natural words of love, of pride… from the heart of someone who will always look out for her. 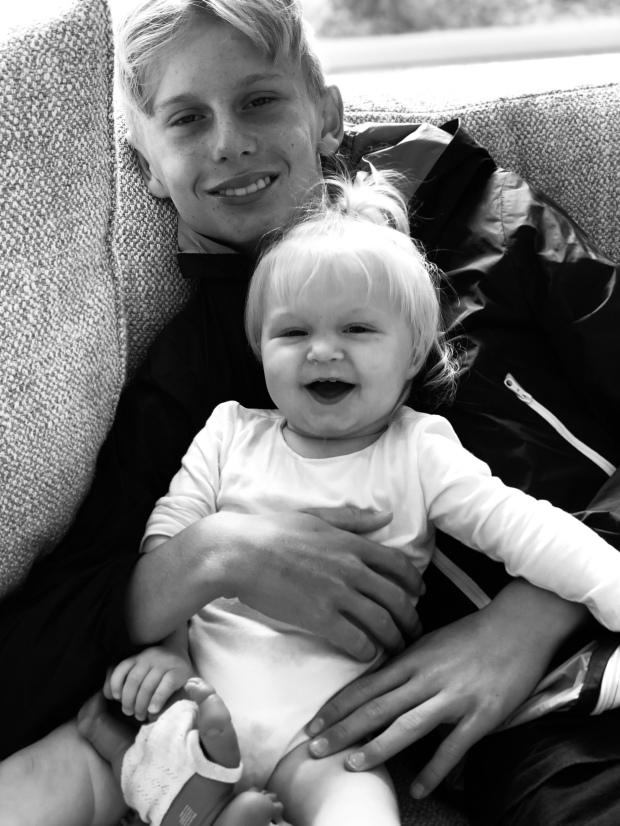 Yes, I’ll say it out loud. I done good. I couldn’t really give a toss if he gets top marks in his schoolwork, if he makes the top team, if he gets invited to all the best parties, if he gets an after school job (unless you happen to be my 15 y o reading this then yes I really do care about your marks. Like, A. Lot). But what I really care about is if he leaves a mark on people’s hearts. If he is kind, compassionate and empathetic to all those he encounters in life. I care that he doesn’t bully or belittle others, that his friends and family matter to him. If he is thoughtful and engaging and mostly, I care about who he becomes. Not what. The rest will fall into place.

I used to think it mattered. When your baby sat up. When they took their first wobbly steps. When they uttered their first indecipherable words. But being that it is our Popsy has barely mastered any type of linguistics other than that of ‘dum dum or mum mum’  which one she’s actually referring to we’re not entirely sure but she has little interest in forming actual sentences (or audible words for that matter). Neither does she particularly care to crawl the ‘right’ way or walk unaided. She knows well enough she can do it but prefers to take things in her own time. She is her own person. Already, God help me. And she has three able-bodied perfectly good servants who are at her every beck and call…there is absolutely no need for her to do anything. She squeals. We all jump. That’s how it is in our house.

I’m only learning now you can NEEEEEEVER compare kids. Especially your own. I never liked dummies before. Never had much need for books or strict sleeping routines. I proclaimed our son had ‘come into our life, therefore must fit into it’ when he was born. And he did. Very well. Then the second one came along and shit got real. I started to like dummies, real quick. And I soon found the only solution for her was following a routine to within an inch of our lives which made things sooooo much easier I cannot even begin to tell you. God bless your soul Tizzy Hall, you are everything.

There’s so much to worry about raising a teen. Too much. You think bottles and flash cards matter when you have an infant. They don’t. Kids all catch up in the end. You get to this stage and it’s all based on fear. You’re navigating a path we never trod as kids growing up in the ’80s where the only bullying occurred via prank calls in the middle of the night or having your daks yanked up through your jeans. There wasn’t this incessant need to be accepted, liked or followed. You couldn’t send pictures of yourself unless you got them printed at the local chemist. Drugs were barely more than weed and if someone didn’t like you they’d say it to your face not share an intimate post you’d made the mistake of showing someone you trusted.

The pressure to be liked, accepted and fit in is so much greater now than it ever was. Our kids, like it or not, are measuring themselves by those they deem as popular and there is an innate sense of being totally lacking in most of them. But what is really scary as all fuck when you’re raising a teen is exactly that. Raising them. Making sure they grow, they feel loved and accepted. That they make it. And I’ve never been more scared in my life.

I’ve learnt with my kids, the age gap is so wide that it’s actually the best thing I could ever hope for them both. They are so damn lucky to have each other and watching your first born just beam with pride about his sister, dammit there really is no greater feeling.

This mother’s day I am so bloody thankful. I am grateful and proud of the Best Thing I Ever Did. And will forever be indebted for the Best Gift I’ve Ever Been Given. Two souls who fill my heart with pride every single day. Who make me realise what I was put on this earth to do…create better tiny humans that make a difference.

To all the mums who feel like it’s getting on top of them, that they’re not doing it right, you bloody well are because you care enough to even think it. To all the mums still trying to be one, don’t give up on your dreams when you hold that tiny person you’ll understand why the fight was so worth it. And to all those missing their mums who are no longer…take comfort in what is left behind. You. And all you can pass on to your own kids. Happy Mother’s Day to all the special women in my life. Lov n’ hugs, LadyMamaG – proud mother-of-two (or three, if you count the mutt) xoxo