This has to be one of the shittiest birth weeks I’ve had in a good while. With tomorrow’s turnover of year peeking its way around the corner, it’ll take more than a gentle tug to pull a smile over this birthday girl’s face by the morning. It’s that bad I haven’t even deliberately left a trail of new handbag selections open on my ipad’s search history. Yes, that bad. As a true Scorpian, I usually like nothing more than to bask in all my day of birth glory for at least a week but the good folk of Gore (if you’ve no idea where that is, you’re not alone but it happens to be the place this bouncing 8 pd 5oz big fat bald ugly bub made her debut) will be somewhat displeased to know I have not spent this week celebrating my birth in usual fashion. I have not celebrated a single fucking thing. 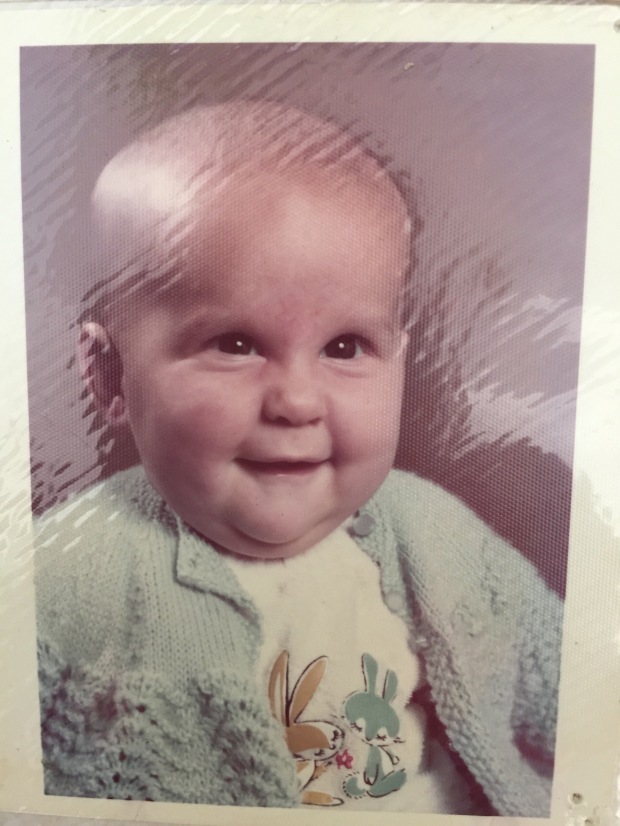 I so wasn’t kidding when I said I was big, fat, bald and ugly…(and wore blue more than a baby girl ever should)

In fact I’ve spent most of it in tears. Angry, deflated and generally like a big steaming pile of layered shit cake. Last month’s OI cycle, the one where I thought it would work, the one where I’ve argued with myself that ‘oh it’s so worked, I think it might even be twins’ only to be beaten back with the counter argument coming from the other side of my head ‘don’t be so fucking stupid your womb feels emptier than Hillary Clinton’s ballot box and you know it.’ Argue, argue argue…it’s all my petulant brain seems capable of these days.

But no, despite the pig fat (intralipid) delivered via one gigantic mother of a catheter through my vein last week, and despite the steroids, the pilates, the weight loss, the lack of drinking, the healthy eating, the weekly acupuncture, the naturopath and all handfuls of Chinese herbs I knock back like a crack whore…Yet. Another. Shitballing. Failure.

We had teeny slither of hope if you could call it that. All the herbs I’ve been insisting The Vet gulp back have made a difference. A huge one. But still our odds stack against us faster than we can say Jenga.

This one I took super hard. I really thought because it was my birth week, we’d get a surprise pressie from the Universe. A positive after so many fucking assing years of negatives. I liked the idea of a July baby. Given the 12 y o is a Sagitarian and has to wait the entire year then gets all his loot in one hit, a winter bub would be just perfect. But any month will do. January to December, I’m up for whatever it’ll give us.

Because every month for four years has been nothing but a shitful battle. Even when I don’t want to think about it, I still do. The hopes go up, the signals are there and then they’re wiped with the click of your fingers. Or the piss on a stick.

To give up, believe it or not has actually been a world harder than keeping on fighting but now I’ve finally reached breaking point. I’m tired. So tired. Tired of arguing with my body, of continually looking for answers we’ll never get. It’s time to say the end is the end. Having tested every bit of my courage, my strength and my tenacity as a person, Fertility it’s time to let me go.

I want this more than the air in my lungs. I want the final piece in our family puzzle. I want it for me, for the 12 y o who told me just this week with a gentle pat on my shoulder,  ‘I’m so sorry mummy. I really wanted a baby brother or sister to look after…’ Because children are the best teachers, the best healers and the greatest gift. I want it for all our beautiful friends and family who prop me up week in week out with their support. And of course…most of all I want it for him, The Vet who deserves and wants this as much as any Dad walking the earth. Who has loved me, encouraged me and picked me up these past four years of motherfucking pain. We all want it.

So, even though we pinky swore and poked needles into our eyes that we never ever would again like everrrrrrr…but because Dr Babies said so, we are giving IVF one last Blaze of Glory. By fuck it had better work. Tomorrow the only thing I’ll be unwrapping is the end of a needle before it gets stabbed into my belly. You’d better hope like fuck it does. Love, hugs n’ birthday wishes to any other Scorps, Lady MamaG xoxo

One thought on “Let Me Go…”