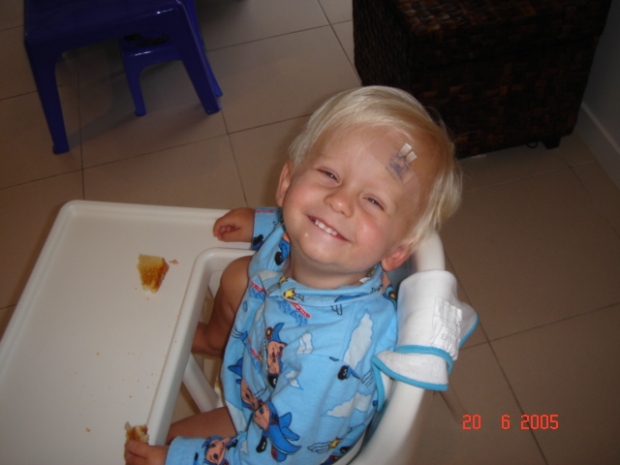 I can tell you the single moment I learned being a mum is the toughest job in the whole wide world. It was a Spring morning in October eight years ago. I watched my not-quite-three-year-old little boy sleep in the bed beside me. His beautiful lashes with the blonde tips on the ends, firmly closed. I still tell him to this day those lashes were kissed by the angels when he was born. I leave him to sleep a little longer. I want him to stay in peace for as long as he can. When he finally stirs I look into his blue blue eyes  and I do the single most hardest thing I’ve ever had to do as a mum. I tell him today is a special day. Today we will say goodbye to his daddy. ‘Daddy is gone to heaven and he’s never coming back,’ I tell him. Even though we lost him five days before that morning I didn’t want him to be scared. I tried and tried to protect him from reality but the time had come and it was my job to shatter his tiny heart into a trillion little pieces.

He tells me ‘No, no!’ in a big voice for an only-just-woken toddler. ‘Daddy’s not dead. He’s at the racecars.’ I am his mum and I can’t lie. I tell him his daddy had an accident in his racecar and he has gone. I will tell him this over and over until his little face bursts into floods of tears, hot red cheeks steaming from his anger, frustration and disbelief. He puts his head back on his pillow as if he’s trying to go back to sleep, to step in reverse from the words he’s just heard from his mummy’s mouth. His mummy, how could she be telling him such horrible horrible things, she’s meant to keep away the pain not stab it in.

That morning I would have rather been anywhere but in that bedroom telling my little boy those words. I would have taken all his pain, his fear and his loss. Syphoned it out with my heart and poured it into my own body so he didn’t have to suffer. That’s what you do when you’re a Mum. You take their pain away…when they’re sick, when they’re scared, when they’re sore and when they’re hurt by the most horrific loss of grief.

Tomorrow, it’s hospital time once again for this here thirtysomething mama as I try to become a mum to another precious little person. It’ll be our eight time on IVF and I’m more hell bent on beating this asshole affliction than Kim K was to be a Vogue covergirl. I’m lucky enough to already know what it’s like to be a mum and that’s why I’ll never give up trying. Love n’hugs, LadyMamaG xox