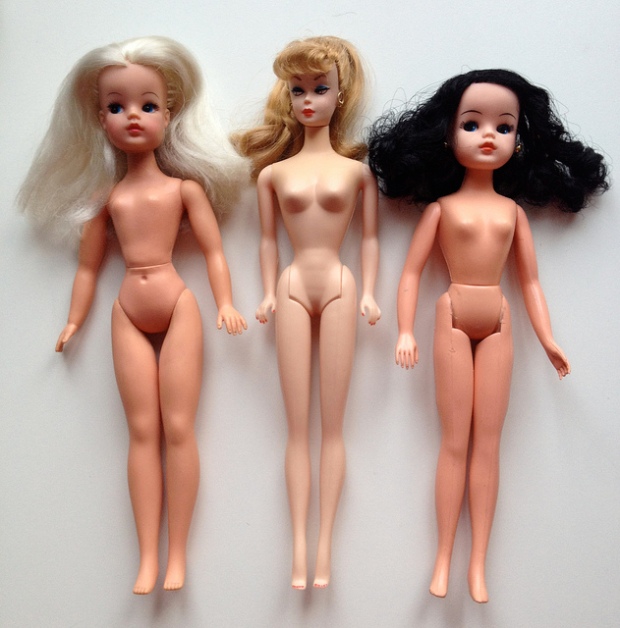 Over my morning cup of cider vinegar and honey the other morning I started reading a newspaper column by a woman who was banging on about boys toys and girls toys. She said, as a kid she never played with dolls and hated pink. I’m not sure what it meant for her as an adult but I’m afraid to say, what you play with and the colour of your clothing has absolutely jack to do with what you had when you were little. It probably encourages the opposite.

Take me for example. I was fortunate to have a very blunt, very boyish bowl cut until I was 10 or 12, by then I was old enough to decide for myself and for some strange reason informed the hairdresser I wanted a permed mullet. I know those two words shouldn’t be used in the same sentence but the ’80s were not a kind fashion decade. To anyone.

When I was a baby, in what could be considered child cruelty, my mother dressed me in my brother’s hand-me-down blue t-shirts and romper suits, to which people would comment she had a ‘very handsome baby boy’. I wasn’t impressed. Then or now. I was a fat, bald and ugly baby but that’s beside the point, you don’t put a baby girl in blue. End of. I was never ever dressed in pink. Not even a slight shade of fuchsia instead my mother bought  me denim dungarees, stripey skivvies and t-shirts – which complemented the bowl cut rather nicely, I’m assuming.

Barbie and her big boobs were not welcome in my house. Apparently they weren’t realistic. Neither was her tiny waist. Instead I had to make do with my flat-chested Sindy doll who did have an unusually large head for her body (clearly that was a tolerable design fault) as well as Daisy, who I think may have been Barbie’s flat-chested, fuzzy-haired younger sister. I also liked playing with my brother’s Action Man in his little blue plastic undies. Trying to keep me from Barbie and her boobs, and her pink everything didn’t work one bit. I spent my late teens stuffing my bras full of padding and wearing chicken fillets to boost my almost non-existent bust. As well as wearing anything and everything pink I could get my hands on. My hair’s been at least past my shoulders for the better part of my ’20s and ’30s and thanks to the wonders of modern ingenuity, a decent bust can be afforded by a good bra with a pair of built-in gel pads.

And as a mum myself, I was never one of those who wouldn’t let my son play with dolls and as most of his friends in his toddler years consisted of girls, he was often seen pushing a doll’s pram and floating around the house in dress ups. When he would stay over at friends’ houses, it wasn’t unusual for him to wear their daughter’s pink pyjamas without so much as a hiccup of protest. He’s even happy to wear the pink t-shirts I insist on buying him, because I think they bring out the blue in his eyes. But like his Daddy, he’s certainly a bloke’s bloke. Hard-wired from birth.

A child is only going to want what it can’t have – be that Barbie and her big boobs, Action Man or Tonka trucks. Get over it already…Love n’hugs, Lady MamaGxox